About Reclaimed Lumber and Beams: The History of Our Reclaimed Wood

Welcome to Reclaimed Lumber and Beams.

Owners Dale Ballew and Ronny Munday have a combined 85+ years of experience sourcing, purchasing, and selling in the lumber industry.

Dale and Ronny take pride in our hands-on approach at selecting, accurately describing, and shipping material to our customers.  Any size orders or full tractor trailer loads are all shipped with confidence. Tell us what you are looking for or give us your specifications. Visit our warehouse/showroom in Lenoir, NC, and personally choose the material you want for your special project. Ask for help with ideas in using reclaimed material for your customer or for yourself.

The primary reason we embarked on this venture is to make this coveted material easier to specify, purchase and receive. We are lumber guys, we love the wood! Our customers can be confident that each order will be exactly what they envisioned and requested.

The History of Our Reclaimed Wood

When the first settlers arrived on the eastern shore of the New World over 500 years ago, the vast forests in what would become America were thick with virgin old growth timber.

Massive American Chestnut trees grew in abundance in a vast area that would someday become the State of Maine to the Mississippi. Chestnut Lumber became a choice variety for construction from cabins and barns, to fences and factories. In the early 1900’s, an Asian blight killed an estimated four billion chestnut trees, leaving this a rare and valuable lumber variety.

The Long-Leaf Pine was another choice lumber material in Colonial times.  Studies have shown that hundreds of years ago over 100 million acres of virgin pine forest stretched across the Southeastern U.S.  Many of these pines were over 500 years old, often growing only one inch in twenty years, when they were initially cut down some 200 yrs ago. They were prized then, as the lumber is now, for their tight growth rings and heavy resin content which has made them extremely strong and able to last a very long time.

The American Barn is the primary source for our reclaimed lumber and beams. Turning these antique materials into flooring, paneling, entry doors, mantels and ceiling beams is our specialty. 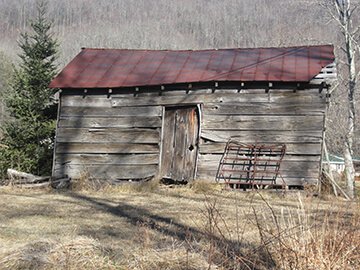